In this post, we are going to analyze electricity consumption data from a house. We have a time-series dataset which contains the power(kWh), Cost of electricity and Voltage at a particular time stamp. We are further provided with the temperature records during the same day for each hour. You can download the compressed dataset from here. I’d further recommend you to have a look at the corresponding ipython notebook.

First part is the Data Analysis Part where we will be doing the basic data cleaning and analysis regarding the power demand and cost incurred. The second part employs a KMeans clustering approach to identify which appliance might be the major cause for the power demand in a particular hour of the day.

So let’s start with basic imports and reading of data from the given dataset.

Let’s have a quick look at the weather dataset as well:

After having a look at the merged-sensor-files.csv I found out there are some inconsistent rows where header names are repeated and as a result ‘pandas’ is converting all these columns to ‘object’ type. This is quite a common problem, which arises while merging multiple csv files into a single file.

Let’s find out and remove these inconsistent rows so that all the columns can be converted to appropriate data types.

The code below finds all the rows where “Power” column has a string value - “Power” and get the index of these rows.

and now we can drop these rows from the dataframe

We have cleaned up the sensor_data and now all the columns can be converted to more appropriate data types.

This is better now. We have got clearly defined datatypes of different columns now. Next step is to convert the weather_data Series to a dataframe so that we can work with it with more ease.

Since now we have both of our dataframes in place, it'd be a good point to have a look at sum of the basic statistics of both of these data frames.

As apparent from above statistics there is a good amount of variation in Power and corresponding Cost values in sensor_data dataframe, where average power is 1.315980kW and minimum and maximum power used throughout the day is 0.11kW and 6.54kW respectively. Similarily there is an apparent variation in temperature in temperature_data dataset, most probably it attributes to day and night time.

To get a better understanding of these variations we’ll be plotting power and temperatures with the timestamps, so as to find out the peak times for both.
But before moving to visualizations we’ll have to create respective grouped datasets from sensor_data and temperature_data, grouping by the “Hour” column. This way we can work on hourly basis. 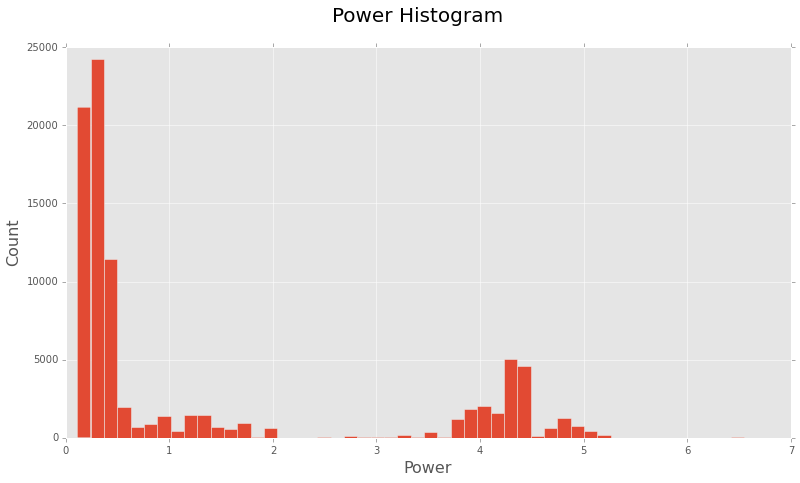 Looks like most of the time this house is consuming a limited amount of power. Although there is also a good amount of distribution in the range of 3.5kW - 5kW, indicating a higher demand.
Let’s now plot the Power Distribution with the day hours. 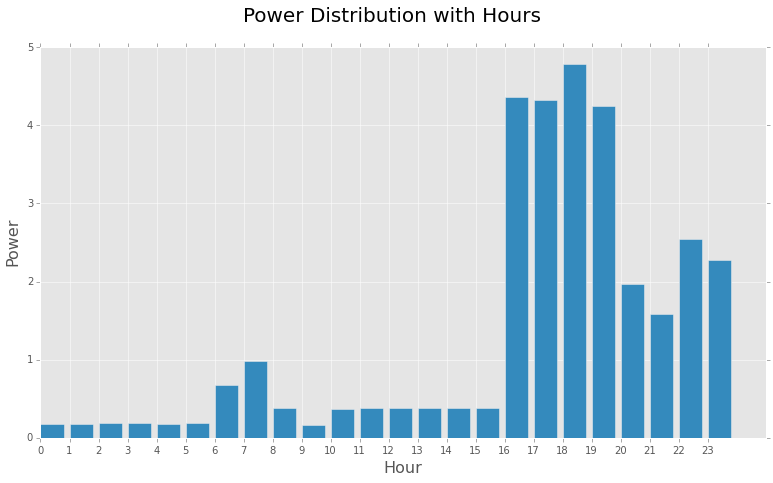 Some of the inferences we can get from this bar chart are:

Some sudden changes in Demand during 0700 and 1800 can be attributed because of random events or the usage of certain appliances and may be counted as noise in the dataset.

Similarily there is a slight oscillation in demand during 0900 which suddenly falls down from 0.38kW to 0.16kW and rises up again to about 0.37kW. Similar change in demand is seen at 2100.

Let’s further plot temperature with the Power to see if there is any correlation among these. 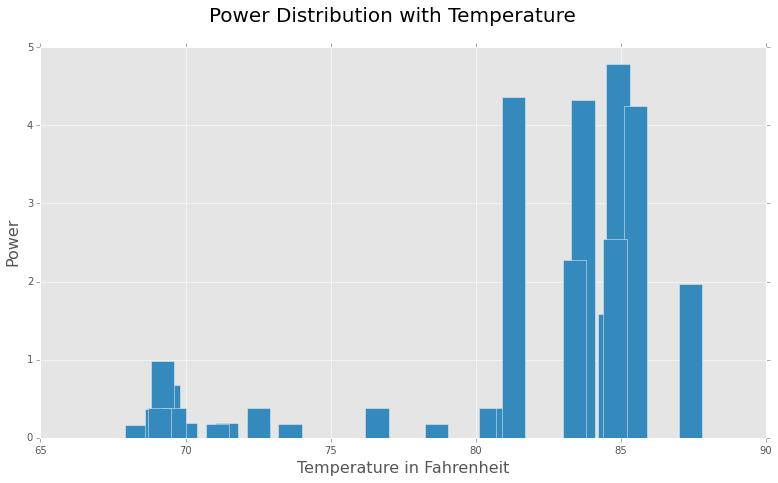 There seems to be a direct correlation between temperature and the demand of power. This makes sense, since with our current dataset which is from May, this shows that cooling appliances like AC, refrigerator, etc. are consuming a lot of power during the peak hours(evening).

We’ll start with merging the grouped_sensor_data and grouped_temperature_data so that we can work on the complete dataset from a single dataframe.

In previous visualization we saw that when temperature is low generally there is less demand of power. But that mainly relates to the cooling appliances in the home. We’ll consider the following appliances:

and would try to identify there presence or on/off state using the merged dataset.

AC, Refrigerator and Other Coooling Systems:

As apparent from “Power Distribution with Temperature” figure, there is a sudden increase in power demand with the rise in temperature. This clearly indicates the ON state of one or more cooling systems in the home. Since these appliances takes a considerable amount of power, this sudden upsurge in the power is quite justified. Clearly Power and Temperature are the two features that indicates the ‘ON’ state of these appliances. Although ‘Cost’ feature is also correlated with ‘Power’ we’d leave it out, since it is more of a causation of Power demand, then a completely independent feature.

During the evening hours(1600 - 2300), an ‘ON’ television set is probably another factor for increased power demand. It is quite apparent from the Power feature.

Slight increase in power demand during morning hours can be related to the presence of these appliances and is justified again by the Power feature.

It’s quite obvious there is a small contribution(considering house owner was smart and installed LED bulbs ;) ) of lights in the house in the ‘Power’ demand. And of course it only makes sense to switch ‘ON’ the lights during darker times :D of the day, Hour and Low Power are the indicators of lights.

During the office hours there’s a very little increase in the Power demand, this can be attributed to home security systems or other automated devices.

Now, we’ll be using simple K-Means clustering using scikit-learn. We are going to consider Hour, Power and Temperature feature from the original dataset. For that first of all we’ll have to merge the sensor_data dataframe with grouped_temperature_data dataframe.

This looks like a pretty reasonable clustering. We can further assign the labels to these clusters, as an appliance detection model. As apparent from the predicted result, We can set the labels for clusters as:

We’ll create a data frame with these labels and merge it with predicted results.

I think this makes sense. As apparent from result dataframe, in hours like 8, 9, 10 there is a high possibility that a Oven or Geyser is being used. On the other hand during office hours(1000 - 1600), most probably Home Security Appliances are taking the power.

Starting from the very beginning, i.e. the Data Analysis process, I think with more data we could group it according to the days(for a week’s or month’s data), or by months(for a year’s data). That could’ve significantly changed the predicted Power values, since the average values over these larger intervals would be smoother.

We’d also have to take care of the seasons and temperature, since different appliances would be taking power in different seasons, so clustering would turn into a bit complicated task compared to what we did with data of just one day.

The most important data that could help in a more accurate analysis would be the power consumption amount of all the appliances in the house. That way it’d be much easier to understand what appliance is taking more power in a certain period of time.

Furthermore, this would also help during the classification task, since we would already know that certain appliances requires much power, hence we could more accurately classify a sample.

One limitation is the number of features we have in this dataset, to learn new features a simple neural net could also be employed to get some hidden patterns here.

You can further look at the Github repo with the above code at: rishy/electricity-demand-analysis. Your feedbacks and comments are always welcomed.